This month we unveiled a Blue Plaque to Florence Barrow, Quaker humanitarian, adult educator and housing reformer. We were particularly pleased that many members of the Barrow and Cadbury family we able to join us, at the Friends Meeting House, Edgbaston, with special thanks to Sheila Barrow, whose late husband Corbyn Barrow was Florence’s nephew and to George Barrow, Florence’s great nephew.

Birmingham Civic Society awards Blue Plaques to individuals who have achieved distinction – through excelling in their work or making a significant contribution to our city. Undoubtedly, Florence Barrow was a remarkable woman and we are marking her endeavours in view of the important relief work she carried out internationally during major periods of conflict and also for the social work and housing reforms she pioneered in Birmingham from the 1920s and continued to pursue for more than 30 years. Florence Barrow was born in Birmingham in 1876 and lived until 1964. Her work had a major impact on the lives of thousands of people both here in the city as well as much further afield.

We are of course very conscious that other members of the Barrow family, including Florence’s father – Richard Cadbury Barrow, her brother Harrison, and nephew Corbyn – all gave years of exemplary service to the city, so would also be deserving of Blue Plaques. However we have chosen to highlight Florence’s life and work in view of the scope and significance of her work within and beyond Birmingham, but also because of her connection to Birmingham Civic Society.

Over the past 12 months we have been celebrating the centenary of the society and as part of our programme of centenary activities we have looked into the history of the organisation and tried to gain a better understanding of some of the individuals, and in particular some of the women, who played central roles in its work. Florence Barrow certainly figured in this regard. She was a Civic Society Council member for 30 years and in 1958, was awarded the society’s gold medal for her support for all aspects of the society’s work as well as for her wider services to the community.

Philip and Carol Couse, who unfortunately were not able to join us on the day, have very kindly and enthusiastically agreed to the Blue Plaque being placed later in the year on their house in Frederick Road, which was Florence Barrow’s former home.

Read about the life and work of Florence Barrow by Dr Sian Roberts here. 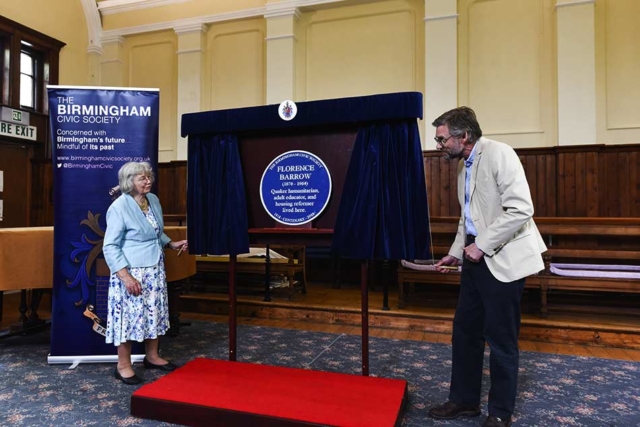