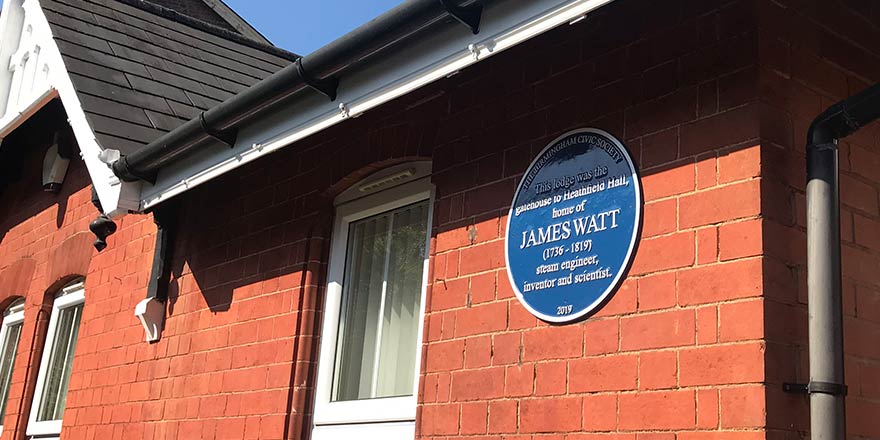 A Blue Plaque marking the site of steam engineer James Watt’s home in Handsworth was unveiled this month as part of this year’s James Watt bicentenary project, which has been led by the Lunar Society.

Born in Greenock in Scotland in 1736, James Watt moved to Birmingham in 1774 to enter into partnership with Matthew Boulton (1728-1809) to manufacture an improved steam engine that incorporated his innovation of the separate condenser. The Boulton & Watt engine was to become, quite literally, one of the drivers of the Industrial Revolution in Britain and around the world.

Watt lived at Heathfield Hall in Handsworth from 1790 until his death in 1819. The Hall was demolished in the 1920s and the estate developed for housing. However, the 19th century gatehouse survives and so was the perfect choice as a location for the Blue Plaque.

The gatehouse’s owner, Maude Kirnon, said: ‘I am absolutely delighted that James Watt is being commemorated with a blue plaque on my house! The gatehouse is the only part of his Heathfield Hall estate to survive – it is hard to believe that this was once countryside. Watt lived here in Handsworth for nearly 30 years and is buried down the road in St Mary’s Parish Church.’

Children from nearby Heathfield Primary School, who have been doing their own James Watt history project in conjunction with Handsworth-based charity Legacy West Midlands, assisted homeowner Maude and Dr Beverley Lindsay OBE OD, Vice Lord-Lieutenant for the West Midlands, with the unveiling.