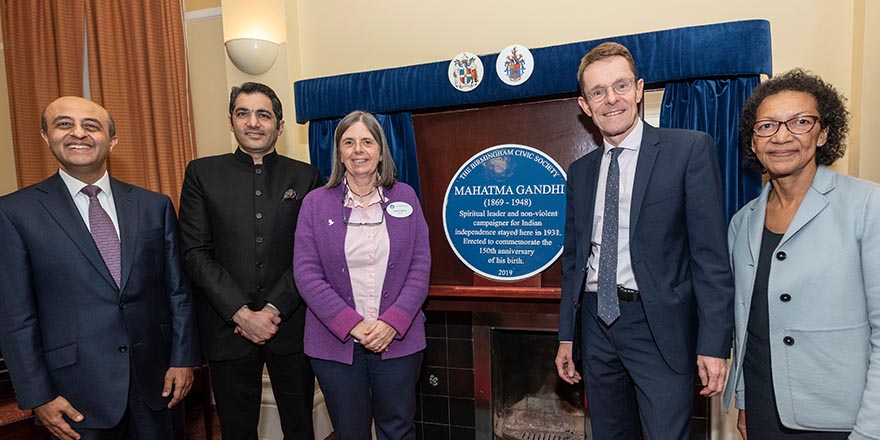 The plaque was unveiled by West Midlands Mayor Andy Street at Woodbrooke in Selly Oak this month, the same location and on the same date the revered civil rights leader visited 88 years ago as part of his UK tour to discuss Indian freedom.

The Indian Consulate in Birmingham has sponsored the commemoration to Gandhi in the Cadbury Room, which is an official Birmingham Civic Society blue plaque.

“It has been enlightening to dig into the history of Gandhi’s stay in the UK, discovering all the places he visited and all the people he met – including King George V and Charlie Chaplin.

“He is a symbol of peace and truth and, although he is symbolic of a time of a very different British-India relationship, he is also symbolic of the importance of ideals and a reminder of our shared heritage as we look to our current and future relationship with India.

“I am delighted the Indian Consul General has shown his commitment to installing this new Blue Plaque as a reminder of our important relationship, and I hope he has been encouraged by our efforts and endeavours to work with the Indian community and with Indian businesses here in the West Midlands.”

Arriving in Birmingham on October 18 1931, Gandhi spoke to an audience of more than 300 people in the Cadbury Room at Woodbrooke about how Indian freedom could be obtained through peaceful means. Gandhi visited Woodbrooke in part as a favour to his friend Horace Alexander, who taught international relations at the centre. After his speech to the Cadbury Room Gandhi stayed the night at Woodbrooke, sleeping on the floor of his bedroom as he had become accustomed. Woodbrooke is a Quaker study centre founded in 1903 by George Cadbury and John Wilhelm Rowntree.

Woodbrooke director Sandra Berry said: “Many Quakers in Gandhi’s lifetime took inspiration from his non-violent campaigning for a better world.

“Woodbrooke today is committed to offering learning opportunities that support individuals and communities in the exploration, deepening, and application of their spiritual gifts, in making the world a better place”

Riat said: “We at Birmingham Civic Society were delighted to be able to recognise Gandhi’s visit to the city in this way.
“I hope the plaque serves not only as a reminder of the visit, but also as inspiration for more people to read up on the history of Gandhi, his remarkable UK tour, and Birmingham’s history as a city.”

Lord Gadhia added: “During his 78-year lifespan, Gandhi visited the UK on five separate occasions. As well as being father of the Indian nation, we are entitled to claim a part of Gandhi in this country too.

“His formative experiences in UK shaped the future Mahatma and his ideas and ideals continue to resonate now more than ever.”

The event was sponsored by Edwards Insurance Brokers.