Coat of Arms of the Birmingham Civic Society 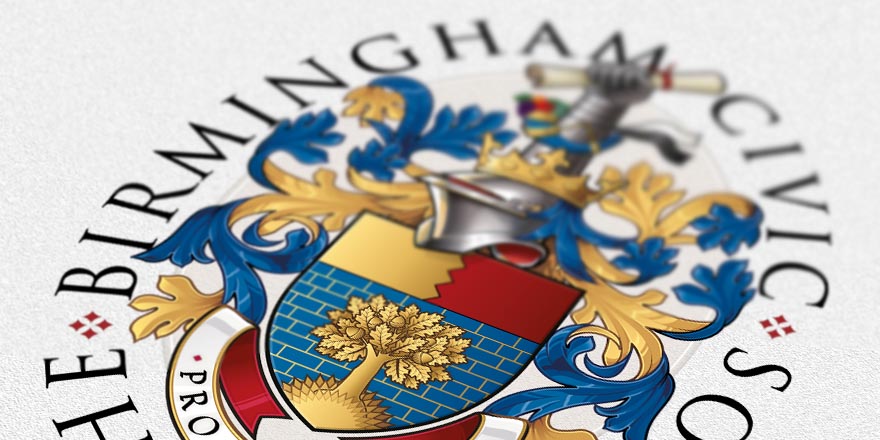 For those of you who may not know the history of the Society’s coat of arms, the following is a brief history of how it came about.

The Society had used a logo since its foundation, which consisted of a shield, with BCS on it, leaning against a tree and with the sun rising over a hill; a clear metaphor that the world (or at least Birmingham) would be a better place in the future for the involvement of the Society. The shield symbolising protection and fighting, whilst the oak tree stood for the natural environment and its beauty.

Despite having been in use since the early days of the Society, there were murmurings on the Executive Council in 2005 that it was a bit dated and that we ought to update it. As a consequence, all sorts of (not very good) alternatives were suggested by members of the Executive Council, but it was decided that we should go for a Grant of Arms from the College of Arms in London, which is the body charged with administering the system on behalf of the Crown (the monarch not wanting to get involved in the day to day running of such matters). A committee comprising the then Chairman, Freddie Gick; Vice Chairmen, Anthony Collins and Glyn Pitchford; and Stephen Hartland, was set up to liaise with our agent, Robert Noel, aka Lancaster Herald.

Discussions carried on for many months and the committee visited the College of Arms on a swelteringly hot day in the summer of 2006.

Grant of Arms are not cheap and once having fulfilled the criteria that you are deserving of the honour, you then have to find the fee, which in this case was £10,000. To ensure that the grant was made in time for the Society’s 90th anniversary in 2008, members of the Executive Council loaned to the Society the fee, interest-free, pending fund-raising to pay them back.

Thankfully it was not too long before they were re-paid, thanks to Glyn Pitchford raising half from Gateleys Solicitors and half from the then Leader of the Council, Cllr Mike Whitby.

With the fee paid and the honour agreed, it was then down to the College to design suitably symbolic armorial bearings to represent the Society. The arms are granted for use by the chairman and members of the Executive Council (now trustees) as officers of the Society. Ordinary members may not use the arms, but an heraldic badge was also designed for the Society for members to use. The legal document by which the arms are granted is by means of Letters patent, which is a standard form, written on vellum and signed by the three Kings of Arms, the Letters Patent were presented at a ceremony in the Council House in October 2007 and have a number of symbols contained in them:

Interestingly, the badge has a mural crown, which represents civic matters, set within the de Birmingham colours and surrounded by a linked chain, representing society. Thus, the members badge, in simple heraldic terms says “Birmingham Civic Society” which is neat.

Now, an updated version for the Society’s centenary, Quentin Peacock of Digital Heraldry, has redone them and given them a fresh interpretation, following the blazon, which is the heraldic term for the description of arms. Arms may be freely interpreted in any way, so long as they follow the blazon.

The Society’s blazon is: 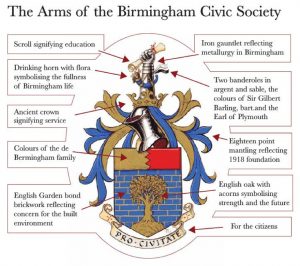 Quentin Peacock has done an excellent job in creating a fresh image for the Society and all of our literature and branding will soon be updated with the new rendition of our armorial bearings.