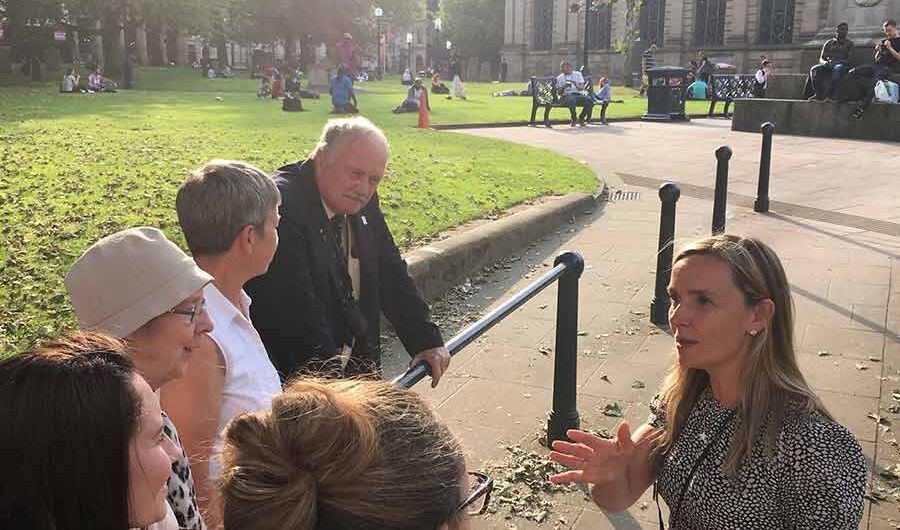 We would like to congratulate member, David Treadwell, who has been awarded an MBE in the 2017 Queen’s Birthday Honours for services to the community in Acocks Green. David, who is Chair of Acocks Green Neighbourhood Forum, and Veronica, his wife, attend many of our events, and we thank them for their support over the years.

A sculpture, celebrating Acocks Green Village in Bloom and designed by Veronica, has recently been installed in the centre of the village. 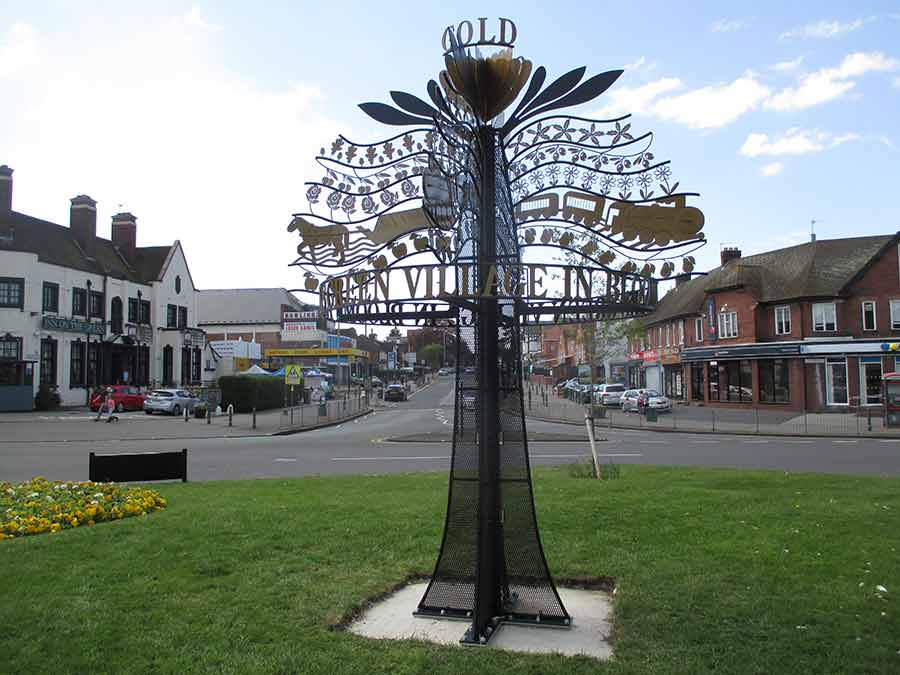 A new sculpture, inspired by the work of the Village in Bloom team and the heritage of the area, was installed in May, on the island in the centre of Acocks Green. Designed by Bloom volunteer and professional designer Veronica Treadwell and locally manufactured by WR and J Collins in Hall Green, the stylised oak tree design makes reference to the ancient Forest of Arden and Mallard Close Community Orchard. The four boughs, indicating the four main routes into the Village, feature a horse drawn narrow boat and a steam locomotive referencing the history and development of the area during the 19th Century.

The various fruits found in the Orchard are depicted, and the roses and daisies represent the many flowers that can be seen throughout the Village. On top of the sculpture is a stylised flower in full bloom, topped with the word ‘GOLD’ – the accolade received by Acocks Green from the Royal Horticultural Society Britain in Bloom over the last two years. With the black trunk and branches, the intricate gold detail shines in the sunlight, creating a unique feature, which the Village can be proud of. The Sculpture still requires a base, which will comprise brickwork similar to the old cobble stones of Birmingham’s streets.

This has been very much a local community project, supported by Acocks Green councillors and BCC Highways Division, with the financing organised by the Acocks Green Village BID Manager.

Born and educated in East Sussex, and having completed a one year Foundation Course at Brighton College of Art and Design, Veronica secured a place at Birmingham College of Art and Design [now Birmingham City University]. Having graduated in 1973 with a BA (Hons) Degree in Three Dimensional Design, specialising in jewellery design, she worked as Designer for ‘Exquisite’, a costume jewellery company based in Solihull.

In September 1974 she joined the busy Design Department of Thomas Fattorini in the Jewellery Quarter, a very famous Birmingham company founded in 1827, and specialising in Civic Regalia, Trophies and badges. She continued with the firm for eighteen and a half years, the last ten as Head of Department, producing original and unique hand painted designs, working closely with the highly skilled Goldsmiths, Die Sinker, Tool Makers, Enamellers, Polishers, etc to produce beautiful hand crafted works of art. When the Company decided to computerise the designs, Veronica decided to change career and retrained as a Registered General Nurse, completing the three year course in 1996. Then, having gained her District Nursing Degree in 1999, she continued to work in the community, finally retiring in 2013.

Veronica said: “It has been both stimulating and exciting to work closely with the team of craftsmen at WR and J Collins Ltd, who have skilfully transformed the original design into the completed sculpture which represents the Community of Acocks Green.”

As well as continuing as a freelance designer, she is also a Trustee of Westley Vale Millennium Green, an active member of Acocks Green Village in Bloom Team, and a member of Birmingham Open Spaces Forum, all involved in improving and conserving our environment.