Our 2015 Next Generation Award Winners 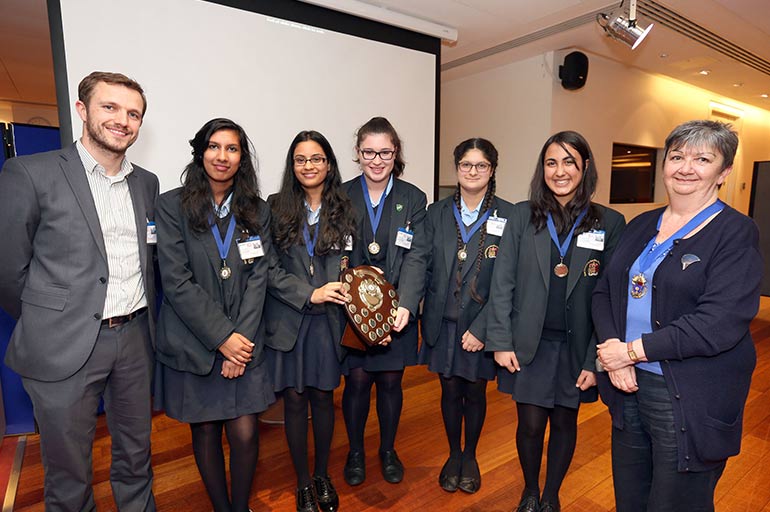 ​The team’s idea​ YOUnify aims to educate young children between the ages of 9-10 about the diversity that Birmingham has and combat racism.

The girls said: “We thoroughly enjoyed our experience and learnt a lot about how to put together a project proposal and acquired new found confidence in public speaking. We also developed knowledge about an issue in Birmingham that we feel strongly about that we otherwise wouldn’t have had sufficient time to address. We believe that Birmingham’s multiculturalism should be embraced; an attribute, not a burden to what is already a wonderful city”

Teacher, Marie Meredith, said: “the team were a delight and an inspiration to work with. Their teamwork and organisation were impressive, however their maturity in dealing with a sensitive issue and being able to make it accessible to KS2 was amazing. We are looking forward to piloting the scheme through our Year 12 who visit primary schools as part of their enrichment programme”

The finals were very kindly hosted again this year by The Royal Bank of Scotland in Brindley Place, and on the evening, representatives from the Secondary Schools that participated in the programme were presented with their awards by the Lord Mayor’s Deputy, Councillor Anita Ward. Judges were Gavin Orton, Lucy Caddick, Operations Director of Elmhurst School of Dance and Chairman of Women in Business Association, Chris Wormwell, Head of Marketing at Newman University, Pat Archer from Royal Bank of Scotland and Kay Rivett, a founding member of our Citizenship Committee.

The runners up this year were ​Swanshurst School with their team’s ‘Get Up and Play project, Small Heath School’s project entitled ‘UK Wildlife’ and Lordswood Girls’ team with a project called HTA or ‘Human Trafficking Awareness’.

All finalists were particularly strong this year, in fact they were so strong that Councillor Ward pledged to make a donation to all four teams to help get their projects developed.