Return of The Auk 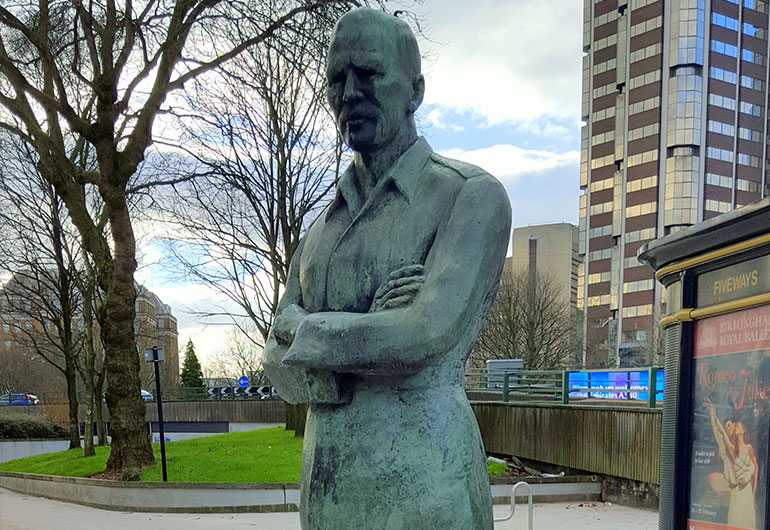 The statue of Sir Claude Auchinleck (1884-1981) has returned to Birmingham, after having been sent off on covert operations whilst the Five Ways Shopping Centre was re-developed.  The statue has moved a 100 yards or so north, so it is now on the pavement on Broad Street looking towards the car park that was once a piazza, named after him, but has ceased to exist and is now a car park for the new Park Regis hotel.

The statue was commissioned and paid for by the Murrayfield Real Estate Company Ltd., the developers of Five Ways Shopping Centre. The Field Marshal, was a distinguished officer in the First and Second World Wars, having been Commander-in-Chief of the Indian Army on two occasions and had been the chairman of Murrayfield’s since 1958. The statue was unveiled by Auk himself, on 27th April 1965.

Other than being chairman of the company which developed the Five Ways Shopping Centre, Auchinleck has no other link to Birmingham, as he was born in Aldershot and a career in the army saw him spend most of his life in India.

The sculptor of the statue was the Anglo-Italian Fiore de Henriquez (1921-2014), who was responsible for a number of portrait sculptures as varied as Igor Stravinsky, Margot Fonteyn, Augustus John, Peter Ustinov, John F. Kennedy, Vivien Leigh, the Queen Mother, Oprah Winfrey and Laurence Olivier.