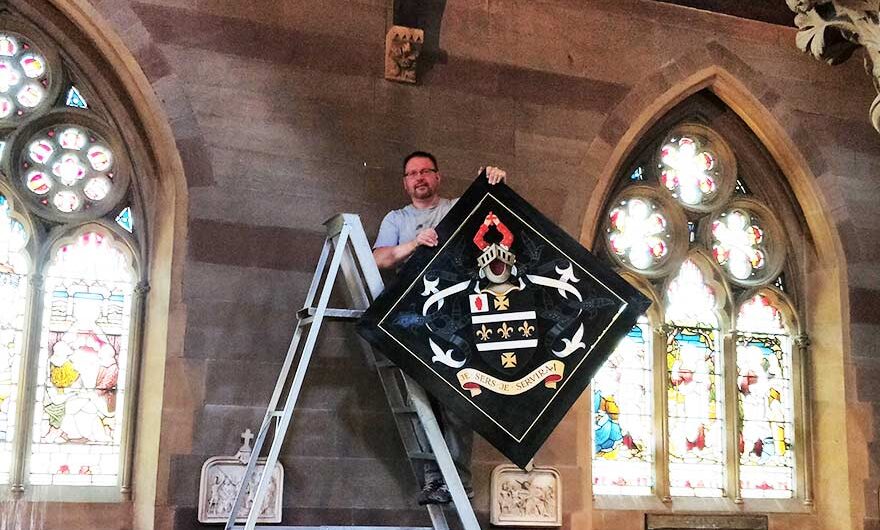 In February the Society unveiled a Blue Plaque to Sir Gilbert Barling, baronet, who, amongst his many activities, was also the first Chairman of the Society.

Sir Gilbert had lived at Blythe Court in Norfolk Road, Edgbaston, but after the death of his wife, moved to 6 Manor Road, near to St Augustine’s church, where he and his daughter Edith were much involved in church life. He had sat on the Parochial Church Council of this church for some years and often took sermons at the invitation of the vicar. Indeed, between 1868 and 1978, the vicarage of St Augustine’s was next door, at 4 Manor Road, and is where his neighbour, Dr Rosslyn Bruce, lived between 1912-1923. Dr Bruce was a great eccentric and was brother-in-law to Scott of the Antarctic, bred green mice and pink rats and founded the Birmingham Fox-Terrier Club, selling one to Queen Victoria, but that is a story for another time.

At the outbreak of the First World War, at the age of 59, Barling placed his services at the disposal of the Royal Army Medical Corps, acting as consulting surgeon in the Southern Command, subsequently being posted at the rank of Colonel to the Western Front from October 1916 to August 1917. His service to King and Countrymen earned him the Companion of the Order of the Bath (CB) (military) in 1917 and in 1919 he was made a Commander of the Order of the British Empire (CBE). On 10 September 1919 King George V conferred upon him a Baronetcy and the College of Arms granted his Coat of Arms some three months later with the motto “Je Sers, Je Servirai” (“I Serve, I Will serve”). Sir Gilbert was clearly a devout Christian, committed to the service of his fellow men and this is embodied in his crest, with the two arms holding aloft a cross.

The funeral took place at St Augustine’s on Wednesday 1 May 1940. The Birmingham Mail reported that the eloquent testimony to the esteem in which Sir Gilbert was held was manifested at the funeral, which the Lord Mayor also attended.

To mark the Civic Society’s Centenary and the Sesquicentenary of St Augustine’s, the church has erected Sir Gilbert’s hatchment.  A funerary hatchment is a depiction within a black lozenge-shaped frame, generally on a black background, of a deceased’s heraldic achievement, i.e. the escutcheon showing the arms, together with the crest. Such funerary hatchments are placed in the deceased’s parish church.

The hatchment has been executed by David Truzzi-Franconi, heraldic artist, and is painted on linen canvas and framed in black.