Birmingham Civic Society is marking its 100th birthday in 2018. This makes me wonder who started it and what ideas concerned those first members?

I have read that the Daffodil Park in Northfield was one of the first areas of land given to the city by the Society as a park, and numerous other green spaces followed. I want to know where to find out more about these.

The website says that in November 2017 the 70,000th tree was planted in Birmingham by a group of Civic Society members known as Birmingham Trees for Life, which started in 2006. Where can I find out more about them and their activities?

l of us, the Birmingham Civic Society has ensured that the history of its involvement in aspects of the city’s life will be preserved for the future and for people to research and investigate, by depositing its records in Archives and Collections at the Library of Birmingham in 2014. These records have now been catalogued and can be consulted there, and the catalogue is available online

The archives include 34 boxes of minutes of committee meetings, annual reports, accounts, membership details, copies of the newsletters and publications, a few photographs, and much biographical research on the recipients of blue plaques in the city, as well as a few surprises, like metal plaques! The

Civic Society has addressed many issues for the communities of Birmingham,

from improving the environment by advising the Council on transport and planning, to encouraging citizens of all ages to take pride in where they live, preserving the city’s heritage buildings and commemorating important citizens through the blue plaque scheme, as illustrated in last month’s blog.

Here are a few examples of the important work the Civic Society has undertaken in Birmingham during the last century:

From the beginning, it has raised funds to buy land to create parks and gardens in the city to provide open spaces for recreation and has published beautifully illustrated guides to, for example, the Lickey Hills and Sutton Park.

In 1923 and again in 1934, it helped to save the Birmingham Repertory Theatre from closure, by campaigns to

boost audiences and by setting up the Barry Jackson Trust to preserve the theatre for the citizens of Birmingham.

During the Second World War the Society saved the stained glass windows of St Philip’s Cathedral designed by local artist Edward Burne-Jones, by having them removed and safely stored so that they escaped destruction when the cathedral was bombed.

Every year now, Next Generation Awards are presented to young citizens in schools who undertake improvements to their local environment.

All are welcome to visit Archives and Collections and find out more about the Civic Society. 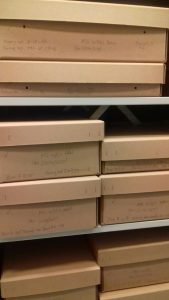