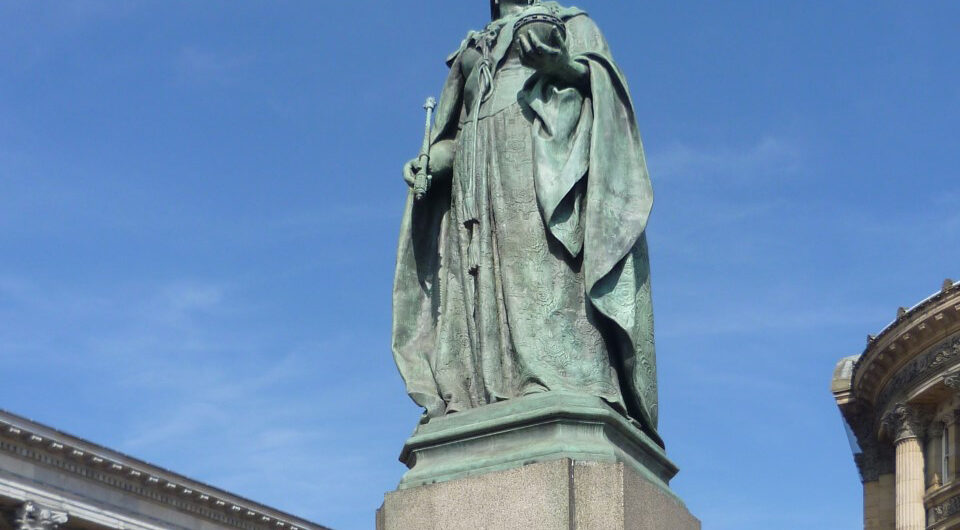 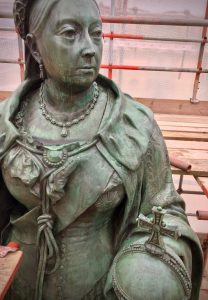 As the scaffolding comes down on the newly conserved statue of Queen Victoria we are taking this opportunity to discover more about the part of Birmingham Her Majesty watches over.

The premier civic space in Birmingham began as a junction of three roads – New Street as it met the road to Dudley (present Congreve Passage) and a lane where Paradise Street now is.

The parish church of Christ Church was built in 1805 on the angle of Colmore Row and New Street. Despite being demolished in 1899 elements of the church remain to this day – the drinking fountain can still be seen at Birmingham Cathedral, the stairs and pew ends at Blakesley Hall and the font, bell and foundation stone went to St Agatha’s, Sparkbrook.

Ann Street, where the Town Hall is now, had a selection of shops including Allin’s – a fabulously eccentric little shop selling almost anything – a cabinet of curiosities which sported the latin phrase Multum in Parvo – much in little.

The Town Hall was built in 1834 and quickly became an important place to hear speakers, musicians and politicians of great fame including Joseph and Neville Chamberlain, David Lloyd George, Clement Attlee, Charles Dickens, Mendelssohn, Elgar, The Beatles, The Rolling Stones and of course, Black Sabbath.

1874 saw the completion of The Council House and its later extensions in 1881 and 1911 housed the City’s burgeoning art collection. The pediments of the Council House show figures representing Science, Art, Liberty, Municipality, Law, Commerce and Industry.

On 10 January 1901 the statute of Queen Victoria was unveiled, just 12 days before her death. Originally a marble sculpture by Thomas Brock it became eroded by pollution and was re-cast in bronze by William Bloye and paid for by Birmingham Civic Society.

Over the course of the 20th century Victoria Square continued to witness significant events, from a gathering of thousands at the declaration of war in 1914, a speech from suffragette Emmeline Pankhurst at the Town Hall and a huge floral football in celebration of the 1966 World Cup.

The 1990s saw a major development and pedestrianisation of the square including Dhruva Mistry’s The River fountain sculpture – quickly re-named the Floozie in the Jacuzzi by Brummies – and amongst these works of art, the charming footprint of Ebony a guard dog who watched over Queen Victoria whilst the fountain was built.

Other statues have come (and gone!) from Victoria Square – Joseph Priestly, Robert Peel, John Skirrow Wright and Anthony Gormley’s Iron Man (soon to return) but the Queen is to remain in perpetuity, sparkling clean and ready to watch over the next 100 years of The City Beautiful.

Now Victoria Square, showing the building of The Old Post Office (saved by The Victorian Society from demolition in 1973). The statues of Sir Robert Peel (furthest) and Joseph Priestly seen on the left hand side.