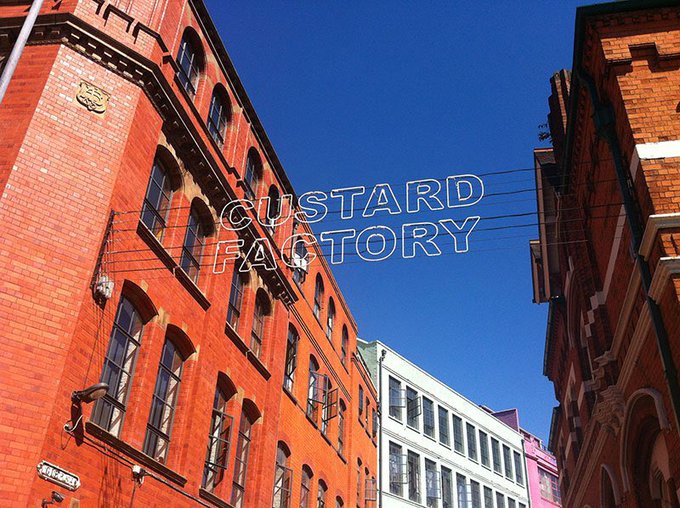 In honour of its centenary, Birmingham Civic Society created the Haywood Award to celebrate people and projects that have played a significant role in Birmingham’s development. The Custard Factory is a well-established, and well-known, creative hub of Digbeth and exemplifies how regeneration can develop and grow. Sandy Taylor explains why its founder and former owner, Bennie Gray, should win the Haywood Award.

I first met Bennie way back in 1987 when Birmingham was planning the future of its city centre. I was working in Birmingham City Council’s Economic Development Unit, set up to find new ways of creating jobs and positive futures for our City as it had been pummelled by huge job losses in manufacturing – over 100,000 in the early 1980s. The Council had just formally approved the construction of the ICC in October 1986. Yet it was clear that the city centre was totally unfit for purpose. It was unattractive, and deadly for pedestrians as the subways treated our citizens as underground rodents.

The idea of a city centre symposium was conceived. Securing the commitment of city leaders – political, business, cultural and community – was not an easy task. But equally, we needed fresh thinking and new blood. We needed leaders in their field who were not afraid of saying what they thought about our city, nor shy away from suggesting urgent action.

So, we invited participants came from a wide range of backgrounds: architecture, planning and landscape, the development and business worlds, economic development and management consultants, artists, surveyors and landowners, councillors and local and central government officials. They came from many parts of the world: both coasts of the USA, Japan, Holland and West Germany. And one of these was Bennie.

The theme for the symposium was as ‘City as Theatre’ because the actions necessary to make cities exciting, attractive, comfortable places can be likened to putting on a show;

When we held the symposium in March 1988, we succeeded beyond anyone’s expectations. Held over three days, a direction of travel was created which enabled the City Centre and Birmingham to catapult itself forward.

The Highbury Initiative – as it is now more well known – enabled: the removal of the hated inner ring road concrete collar and crime-ridden subways, extensive pedestrianisation, collaborations between the city’s cultural bodies and artists to design new city squares, the creation of a city design approach and the identification of “quarters” to focus the next stages of the city’s resurgence.

Bennie is an unusual entrepreneur. His background is in reinventing and reinvigorating the antiques trade in London. In 1976 he created Alfie’s Antique Market in Marylebone and in 1977 Grays Antiques in Mayfair. He took up these old and dilapidated buddings and gave them a new focus, and new life.

He also took a former bookcase manufacturing/oven manufacturing/drug warehouse building in Kensington in the early 1980s and renamed it Canalot as a shared workspace, dividing the building into workshops and quickly filled them with small independent film, TV and music businesses. The other key ingredient is his passionate belief that small businesses and business start-ups are the lifeblood of a successful economy, both locally and nationally.

He has described himself as completely unemployable and a dyed-in-the-wool entrepreneur, but if there is one theme running through Bennie Gray’s professional life, it’s a focus on bringing people together to create thriving working communities.

“I stumbled across the synergy of lots of small businesses working together a long time ago,” he said. “It all started really after I failed as a musician – I studied music.

So, when he came to join us in Birmingham in 1988, he could see the potential. We had creative entrepreneurs and artist who were crying out for more permanent workspaces instead. He said he would see what he could do. Within months he rang me up to say that he had bought two buildings which we now all know as The Custard Factory and the Big Peg.

Thirty years later the Custard Factory has grown far beyond the confines of the original factory to become the city’s creative quarter and the Big Peg provides a home for more than 500 people working in small-scale creative businesses.

Both have been the inspiration for revitalising ignored working communities and breathing new cultural life into the city. He has previously said “I was blown away by that. It’s a terrific example of how a working community can establish a network of links that are commercially fertile.”

I do believe that if we hadn’t invited Bennie to Birmingham back in 1988, these buildings would been either demolished or converted to niggardly flats. And the city’s creative energy would have been diminished greatly.