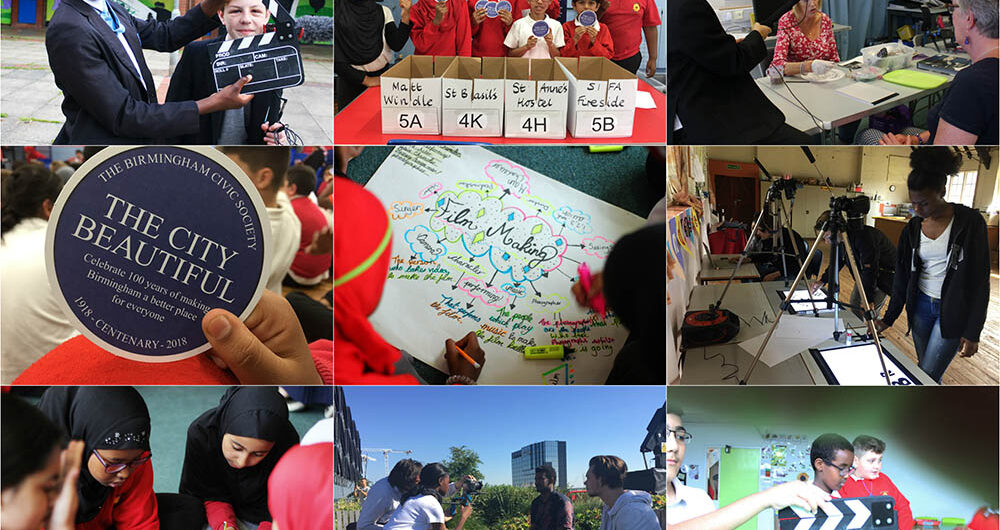 What makes #TheCityBeautiful for a young person living in Birmingham today? Our film crew of 16-18 year olds from Ladywood are creating their own narrative through a film capturing the places, people and stories of the city which matter to them and their peers.

What can residents do to improve their own local environment? A group of year 9 students from Balaam Wood secondary school in New Frankley are making a film which documents a community-led mural project along Arden Road shops involving 10 groups and schools who are creating new artwork to beautify and smarten up the unused units in the parade and install planters. Students are researching the history of where they live, working with an artist to create their own mural, and showcasing through the film how active citizens in their community are working together to make where they live #FrankleyBeautiful.

The whole of year 6 is involved in the film project at Chandos Primary school which has dedicated 6 weeks to a local heritage study about Birmingham’s railways; researching the effects that the coming of the railways had on Highgate in the past, the changes that are happening now with HS2, and imagining how they will, as active citizens, use their voice in a future debate about the fictitious arrival of HS3! Years 4 and 5 have also been involved and researched local organisations and individuals whom they thought were worthy of a Blue Plaque. After some impressive presentations, they took to the polls and voted for their winner; the honour going to homeless charity SIFA Fireside.