‘In honour of its centenary, Birmingham Civic Society created the Haywood Award to celebrate people and projects that have played a significant role in Birmingham’s development. John Madin’s Calthorpe Estate redevelopment (1956-58) is on the shortlist because the committee felt that it’s an excellent example of innovative regeneration and highlights the positive legacy of planning in the city during this period.”

Calthorpe Estates commissioned John Madin in response to the requirements of the 1952 Birmingham City Council (BCC) Housing Development Plan. Madin had to meet requirements set by both; for the redevelopment to maintain housing density of 75 persons per acre (BCC) and to retain the open character of the 1,600 acre estate and raise more income from property (Calthorpe Estates).

First of its kind

John Madin’s Calthorpe Estate re-development is nationally significant. It is the first example of a privately planned estate redevelopment in the late twentieth century. Madin used mixed density housing, set in open landscaped areas, to achieve BCC’s specifications. High blocks of flats, walk-up flats and terraced housing provided a flexible housing mix. The use of the existing landscape and the retention of the mature trees ensured that the environment met specification, and that it continues to be a joy for the residents. 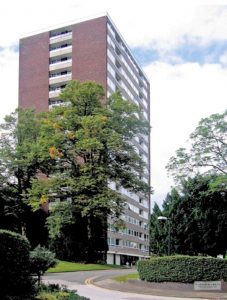 Warwick Crest on Arthur Road is a high rise hidden in the trees with the garages discreetly concealed in the dip.

Madin wished to create a sense of community. Cul de sacs and the creation of pedestrian (rather than road) access across the development helped to achieve this. Shopping centres,  created on each side of the estate, remain vibrant shopping areas today.

In addition, Madin reserved 70 acres between Hagley Road and Calthorpe Road for commercial development. He designed an avenue of tall office blocks set back from the main road in their own landscaped setting. Five Ways and Hagley Road became, and remains, a major hub for Birmingham’s commercial dealings. When designing this area Madin had a formula. He placed the buildings in the existing natural landscape and designated one-third building, one-third landscape, one-third car parking. The green space and airy nature of the architecture has ensured that it has remained a pleasure to travel into the City along the Hagley Road.

Madin subtly modernised Edgbaston without anyone noticing.  He retained the open green character while introducing stylish modern architecture. Madin’s plan was respectful of the existing garden landscapes maintaining mature trees, ponds, shrubbery and boundary features. High towers helped to increase housing density, but the existing landscaping and tree cover meant it did not disrupt the street scene. Thus the character of the estate, primarily comprised of large Victorian mansions with landscaped gardens, has remained intact. 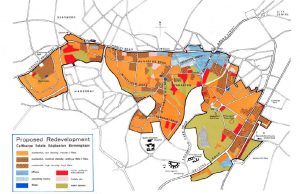 The plan included domestic housing, the provision of local amenities and a large new commercial area.

At the same time, Madin introduced modernity with Scandinavian and modernist designs.  The domestic housing stock continues to be highly regarded and is surviving fairly intact. Current residents’ continuing sense of community – whether in the high flats or in the small communities of the cul de sacs – is a tribute to the quality of the original design.