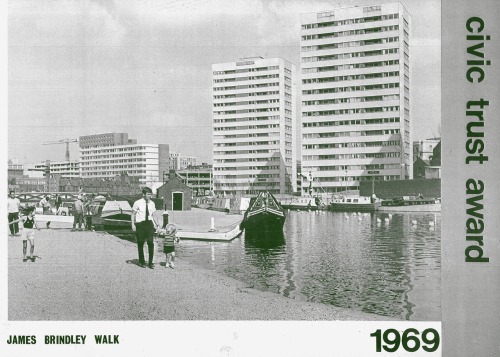 In honour of its centenary, Birmingham Civic Society created the Haywood Award to celebrate people and projects that have played a significant role in Birmingham’s development. Peter White MBE (1942-2018) is on the shortlist because the committee felt that his recognition of the value of the post-industrial canal network paved the way for much of the regeneration we see today.

The potential of urban post-industrial canals

Peter White MBE (1942 – 2018) studied at the Birmingham School of Architecture. After qualification, he worked for the City of Birmingham’s architectural department. He recognised the value and potential of the city’s post-industrial canal network at a time when many others did not. White also understood his role as a conservationist. This sympathetic view resulted in the scheme for the James Brindley Walk, the stretch of the canal close to the arena and the site of the Flapper pub, which proved popular. 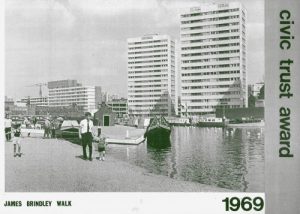 The James Brindley Walk development on completion in 1969

British Waterways invited White to take on a new role as architect/planner following his scheme for the James Brindley Walk. There he produced the Waterways Environment Handbook. A guide “…that gave details on how best to treat even the most basic structure with sympathy. He was always conscious of the historic nature of the system, and travelling with [him] was an education. He had a great eye for the meaningful detail, and always had pencil and paper at hand to sketch anything he thought worth recording.” (RIBA Journal) 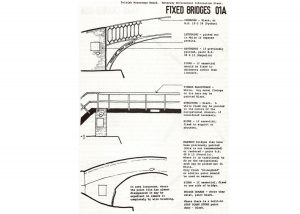 White’s plans for the restoration and reuse of Birmingham’s city centre canals in the 1960s and 1970s led to a re-evaluation and recognition of the benefits of canals to local economies. Without him,  the developments we see today and its retention of the wider canal networks original character (for example at the Black Country Living Museum) – may never have happened. 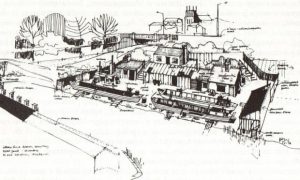 From the RIBA Journal:

Peter’s legacy can be seen in the way in which so many towns and cities have now embraced their canals instead of ignoring them. But it is not only the grand schemes that reflect his influence, it is also felt in the sense of ‘rightness’ that so many people experience as they travel the canals for pleasure.

His work, according to canal historian, Mike Clarke, “…acted as catalysts for urban regeneration in Birmingham and elsewhere and encouraged the growth of ‘brown-field’ redevelopments long before the term had become fashionable. Today the heritage value of old industrial architecture has become widely accepted, with many canalside buildings now finding new uses – from museums and leisure centres to pubs, restaurants, offices and Manhattan-style loft conversions.” 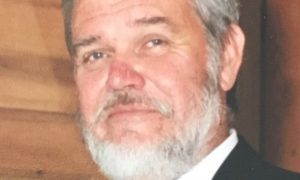